Photo of the Week: Bus in Motion

This week’s photo features a Sun Metro Bus as it travels through the intersection of Oregon and Mills in downtown El Paso. 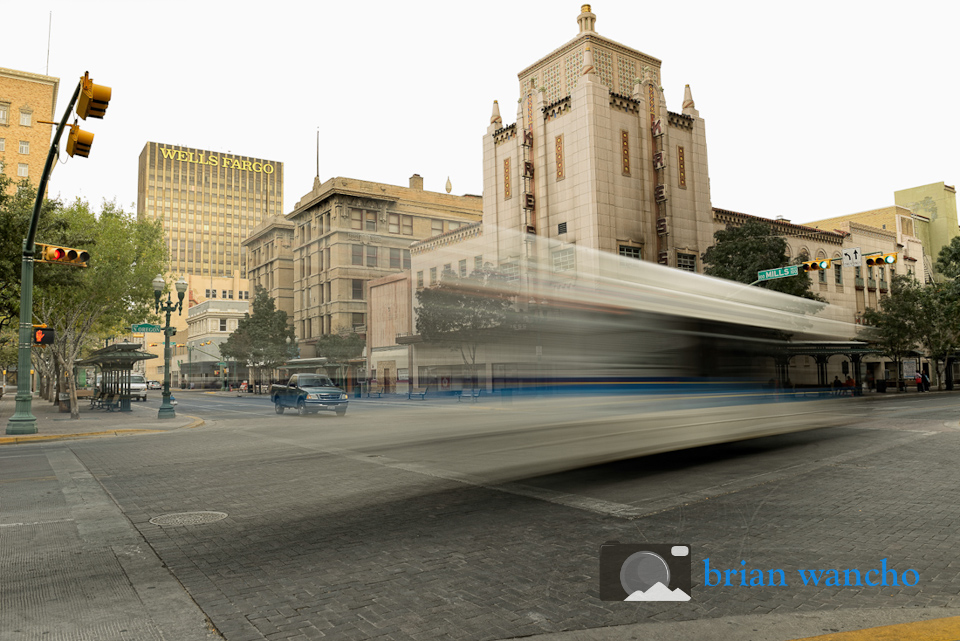 I have visited this intersection at various times of day and night. I like it because of the different buildings as well as the abundance of vehicle and pedestrian traffic. For this photo, I wanted to capture the motion of a passing bus against the static setting of the buildings. To accomplish this I used a variable neutral density filter that allows me to select how much light allowed to pass through to the camera. The reduction in the amount of light allowed me to slow the shutter speed so that the camera could capture light for a longer period of time.

When working with motion in still photography, the level of complexity is increased because the quality of the blur (mostly the opacity of the object) is determined by how long the object stays in the scene. Two buses traveling at the same speed, but at different distances from the camera will blur differently. It is the speed relative to the field of view that matters. On top of that, the size and color of the moving object will have an impact on its overall appearance in the image.

To capture the image above, I placed the camera on a sturdy tripod and framed the scene how I wanted it prior to adding the light-blocking neutral density filter. Because of the volume of traffic that passes through this intersection, I was able to count the number of seconds it took a bus to pass through the scene when it was in the near lane. With that information, I adjusted the shutter speed on the camera until it matched the desired length of time. I then adjusted the neutral density filter until the camera’s built in meter told me that I had the proper exposure.

After that, it was just a waiting and trial-and-error exercise.